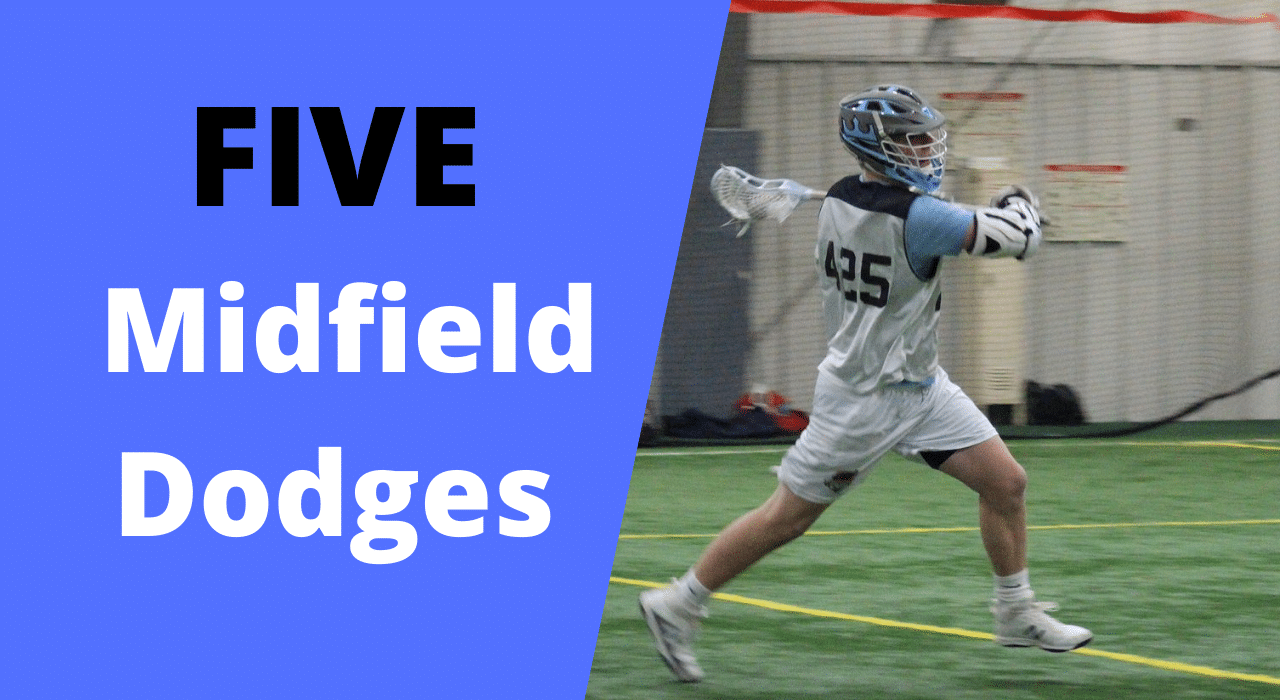 You’re a midfielder and you are asking yourself, what do I need to do to become unstoppable?

Well today I’m going to tell you 5 incredible midfield dodges that you can implement in your game right now.

Whether you have been playing lacrosse for 1 year or 10, these are 5 moves that every midfielders should use right now. If you’d prefer to see a video version of this article, check out this video on my YouTube channel:

In this article, I’ll go over each midfield dodge, why I think it’s effective, when you should use it, and what types of  lacrosse players would find it the most useful.

If you’re new to the sport, I’d highly recommend taking some notes, and if you’re more advanced, I’d encourage you to read this article in full as I guarantee there’s something you can still learn.

Before we get started, would you mind if I sent you an email each week with film breakdowns and drills to become a better lacrosse player?

If the answer is yes, please go join the Lax Weekly email newsletter! Many of you have already subscribed to it recently which is incredible. My goal is to help all of you become great at this sport that I love so much.

The number one most unstoppable midfield dodge is the split dodge to roll back. If you’re a righty, this is where you split dodge down to your left and then roll back to your right and shoot. This move is extremely popular and it’s because of how effective it really is.

Many times defenders are good enough to stop you on your first split dodge, but it’s really difficult to stop two dodges in a row. When you roll back, the defender is completely caught by surprise. And another great thing about the dodge is that when you shoot, your defender is blocking you from the view of the goalie, so that means the goalie has no clue where the ball is when it comes out of your stick. This means that as long as you place the ball on goal, you can almost guarantee yourself a goal, and that’s pretty cool.

Every type of midfielder can use this move, whether you’re more of a big and physical dodger or a small and quick dodger. In order to make this move work, you need to have an effective split dodge to get the defender to commit. I talk about this in my other top 5 dodges article.

If you’re looking for an immediate boost in your lacrosse game, learn this dodge. Go out and practice 100 shots right after you finish watching this whole video. Then do it tomorrow. Then do it for a month and you’ll be a ninja.

The next move that every midfielder should learn is the wing dodge. This is where you bring your man to the side of the goal, also known as the wing, instead of dodging from up top. When you dodge from the wing, it confuses the defense and makes it easier for you to score, and that’s flat out awesome.

When you wing dodge, there’s a variety of different moves you can do, but my favorite one is the face dodge. This is when you bring the stick across your face and go underneath your defender. You’ll see a ton of Canadians do this because they can keep it in their dominant hand the entire time. The face dodge is really really hard for defenders to stop and I think you could score a lot of goals with it.

Midfielders who might be smaller and quicker could really benefit from the wing dodge. The wing gives you plenty of space to work with which means you might be able to get by defenders easier than if you were up top.

Next time you’re in practice, take your defender down to the wing and see what happens. Who knows? It might be your next secret dodging spot.

The next unstoppable midfield dodge is the answer move. This is where you dodge down the alley and instead of switching the stick to your outside hand, you keep it in your inside hand and shoot. If you can pull this off, it’s practically impossible for defenders to stop because they have no idea that it’s coming.

I will say, this move is very advanced. There’s only a handful of midfielders who can really do this move well. But that should fire you up, because that means that you could learn something that almost no one else knows how to do. This will give you a massive leg up on your opponents and you’ll stand out to coaches and recruiters.

The best video on the answer move is right here on YouTube, brought to you by pro lacrosse player Deemer Class. He breaks down exactly how to do it.

So, go learn the answer move and quickly watch yourself become the most impressive midfielder on your team!

Now for the fourth dodge which is the swim move. This move was made popular by none other than one of the greatest lacrosse players of all time, Paul Rabil. This is where you bring the stick over the top of your defender in a motion most similar to, you guessed it, swimming.

If you’ve watched enough of my YouTube videos, you know that I say midfielders should try to dodge in space as much as possible, meaning you should have several feet of separation between you and your defender when you dodge. But the swim move is different, it’s actually more effective when your defender is close to you.

You’re trying to get your defender to try to poke you in one direction and then swim over him in the opposite direction. If you have a defender who is really aggressive on you and trying to get to your hands, the swim move could be the perfect dodge.  But let me say, the swim move is a high risk high reward kind of dodge. You’re bringing the stick directly in front of your face, and that means the stick is vulnerable to getting checked more than other dodges. That’s why you have to use it only in the right situation.

This should not be a dodge that you’re using more than 2 or 3 times a game.  I like to think of my lacrosse game as a toolbox, where I have different dodges and skills to use in different situations, just like you have different tools to use for different things. So the swim move is just one more thing to add to your toolbox. Try it out in your next practice and see how it works.

And finally for the last unstoppable midfield dodge, the bull dodge. The name says it all, in this dodge, you bull your way into your defender, stop, and shoot. If you’re a big, strong midfielder, this is a way of using your strength to your advantage. When you pull off a proper bull dodge, you’ll leave the defense and everyone else watching in shock. It’s definitely one of the coolest dodges.

There’s no better midfielder that exemplifies the bull dodge more than Sergio Perkovic. The former Notre Dame superstar turned pro lacrosse player has done the bull dodge countless times and it has lead to some crazy looking goals.  What I love about this dodge is that it’s so simple. There’s not much going on, you’re just bullying your defender, taking a big power cradle and letting it rip.

If you need motivation to go lift weights, the bull dodge is your perfect motivation.  So there you go – those are 5 great dodges for all midfielders!

Check out the free Lax Weekly email newsletter or the YouTube Channel for more great stuff on how to become a great player, and I will see you next time!

The Top 10 Lacrosse Exercises to Elevate Your Game