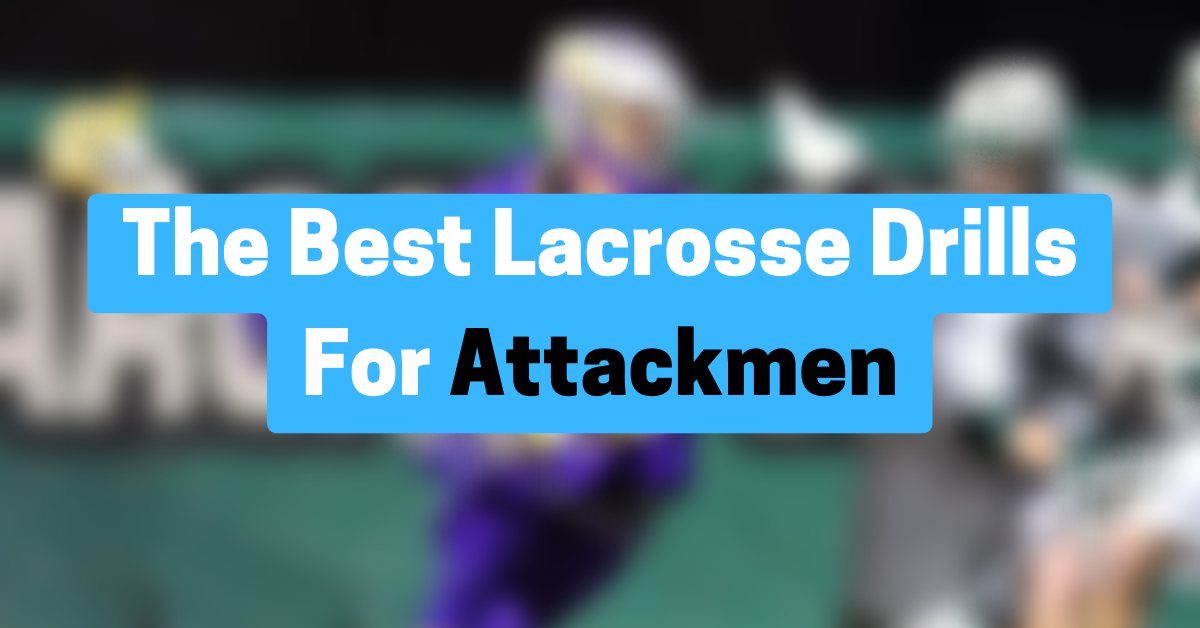 Want to know the best drills for attack in lacrosse? Here are 11 of my favorite ones I use with my players.

Hi, I’m Jake – I’m a lacrosse coach and player. One of the most common questions I get asked by attackmen is “what are drills that I can do that specifically focus on attack?”

Well today, I made a definitive list of drills I use in practices and private lessons with my attack players. They help you develop your shooting, dodging, and passing ability. These are all skills you need to become a great attackman.

I purposely designed these drills to be done either by yourself or with a partner, so you can do them anytime and anywhere. You can also view these attack drills on my YouTube channel below. Let’s get started.

After talking to dozens of great college and professional attackmen, this is one of their favorite drills.

First, place a bucket of balls at X (behind the goal). Next, place a cone about 3 yards up and 3 yards out on either side of the goal.

Now pick up a ball at X and make a hard move towards one of the cones. Once you get to the cone, shoot the ball. Repeat the drill and go to the other side and do the same thing.

This drill is going to help you on one of the most common shots as an attackman, where you’re coming around the goal for a quick shot.

I want you to change up spots where you’re shooting, so try shooting it high, low, left, right. Also practice bouncing the ball as you shoot.

Each goalie you face is going to have different stances and tendencies, so you don’t want to just shoot in the same place every time.

This time you want to place the balls a few feet further back from X.

Now I want you to pick a dodge – whether it be a split, roll, or face dodge,

Make that move at X, and then change directions and go towards the cone and shoot.

This is going to be a more realistic game-like situation, where you have the ball at X and have to dodge around a defender to score.

I want you to really pretend like you have a defender on you and you’re trying to get past him to score. Do this drill 100% – don’t just go through the motions.

Another add-on to this drill is to do combo dodging, where you do two different dodges before shooting. So this could be split into a roll dodge, or maybe two split dodges in a row. Combination dodging can make you a much more effective scorer because a defender has to guard two dodges instead of one. I also have this practice dummy that I use to simulate a defender – this is totally optional but I emailed the company that makes these and got a $15 off coupon code if you use this link and use the code LAXWEEKLY at checkout.

Just like the “From X” drill – place the balls at X, make a dodge at X, and then make a move towards the cone.

But, instead of shooting it at the cone, do an inside roll or a rocker step – which is a fake inside roll –  and then shoot the ball.

This is the most realistic and game-like drill so far . You make a move at X, but your defender plays good defense on you. Then you have to make one more move – like the rocker or inside roll – and score.

The great thing about the inside roll and rocker dodge is that you’re playing mind games with your defender. If you do an inside roll on your first dodge, he won’t be expecting the rocker on the second dodge, and you’ll be extremely hard to guard.

Another tip is to throw a fake or two before you score – these should be really short and quick, just enough to get the goalie to move before you place the ball.

To start, I want you to place a few balls spaced apart on the crease.

Then start behind the goal, and run around to scoop up one of the balls and do a quick fake and shot.

I want you to focus on a two things here:

Third, get creative here. This is a time to throw behind the back or between the legs. Lacrosse is a creative game, and you should get creative. 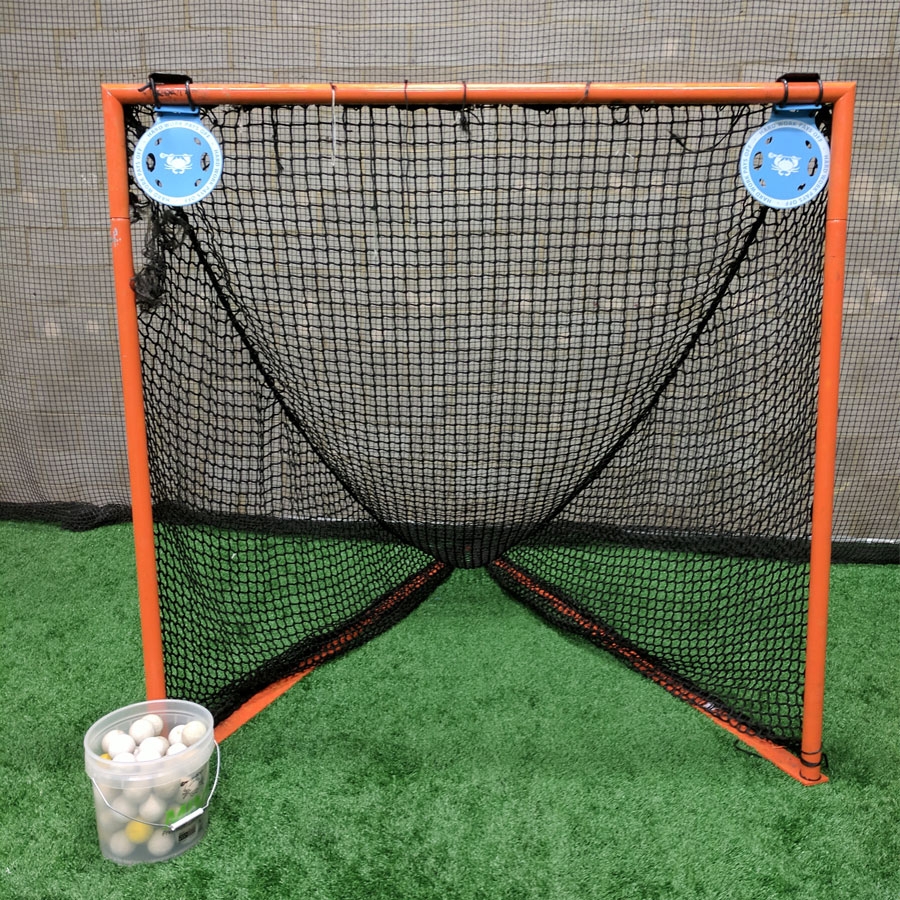 I also like having these shooting targets up so I can really focus on hitting spots on the cage.

Also, bonus point if you have a partner. This drill becomes even better because instead of scooping the ball, you can just have them pass you the ball.

To do this drill, place a cone anywhere between 5 yards and 12 yards away from the goal. Then I want you to place balls a few feet up from that cone.

Then take a ball, do a pass fake, and then take a shot.

This drill simulates a game situation where you throw a fake to get the defense thrown off, and while they’re confused, you take a shot. I also like this drill because it forces you to be on your toes.

The worst thing you can do is practice standing flat footed and shooting. You want to be in a good position almost like a triple threat position in basketball.

Also, if you don’t know how to fake yet, just turning one way before scoring is good enough to throw your defender off,

You don’t even need to fake, but doing this drill will help build the muscle memory of doing some sort of move before scoring.

Place balls a few feet behind X, and place two cones about 5 yards up and 5 yards out from the goal.

Then pick up a ball, run towards the cone, and plant with your inside foot (so if i’m going to the left of the goal, I’m planting with my right foot).

Then take one step away from the goal, and turn around and shoot.

If you’ve never done the question mark dodge before, this is going to feel very weird, so feel free to take it slow in the beginning and just work on the footwork.

Plant with your inside, step with your outside, and turn around and shoot.

Once you get comfortable with this dodge, another thing you can do is do a question mark fake. So you do everything like a normal dodge but don’t actually shoot. Chances are, your defender will be so confused by the fake, and then you’ll have plenty of room to score.

This time i want you to put a bucket of balls several yards above the goal, and a cone a few yards below the lacrosse balls.

Then grab a ball, crow hop towards the cone, and then plant your foot and explode away from the cone and take a shot. This is called the hitch and go dodge.

If you have a partner, they can throw you the ball as well. But you can also do this completely by yourself.

Once you start feeling comfortable doing the hitch and go, every once in awhile, you can roll dodge back towards the way you planted and shoot with your other hand.

And for the final progression – when you crow hop, you can face dodge by the cone and shoot with your same hand.

The “hitch and go” is great for simulating a game where you catch a ball and then do a quick move to get your hands free for a shot. If you do multiple different variations, you’ll always be able to keep your defender guessing.

Grab your bucket of balls and place them a few yards behind the goal. Then pick one up and make a split dodge at X.

As you get close to the goal line, plant your foot and make a quick lateral move with your stick and head up like you’re trying to pass. Then move back up the field and shoot the ball.

The Z Dodge is great because it looks like you’re just stepping away for a pass, but then you actually score the ball.

The Z Dodge should be a staple move in an attackman’s arsenal.

Start by placing a bunch of lacrosse balls way far away from the cage at the midfield line if your field has lines.

Then, I want you to start at the goal and pretend like the opposing team has the ball and is clearing the ball to the offensive side of the field.

Get low in a defensive position, shuffle and really pretend like you’re actually playing defense and riding the defender.

You might feel a little funny, but you’re actually practicing what you would do in a game.

Once you get to the midfield line, scoop up a ball and quickly run back towards the goal like you’re on a fast break. Make sure to keep your eyes and stick up, and then feel free to shoot the ball.

This drill is half lacrosse, half conditioning because you’ll have to do a ton of running. It will really help you develop your riding ability.

Most of the time, you should practice shooting realistic game-like shots.

It’s also important that you also get creative and shoot from far out distances and shoot all sorts of crazy shots that you wouldn’t normally practice.

Set a timer for 10 minutes and just start shooting.

Shoot the ball high to low, low to high, sidearm, it doesn’t matter. Lacrosse is fun and creative, and give yourself the freedom to do this.

Similar to the “Free Shooting” Drill, go anywhere around the goal and do all kinds of new dodges.  It doesn’t matter how realistic or unrealistic these dodges are.

This will help you develop new dodges that you never thought of before.

What is the best lacrosse gear for attack?

If you want to be a good attackman, you need the right gear. Here’s a quick list of my top recommendations for attackmen:

Lacrosse Balls: Here are the best lacrosse balls that I’ve found on Amazon. Buying 30-100 lacrosse balls is important so you don’t have to chase balls while you practice.

Lacrosse Goal: This is a cheap lacrosse goal on Amazon that’s perfect for your backyard. If you can afford a higher quality goal, this is my choice.

Lacrosse Head: The go-to attack head I recommend is the ECD Mirage 2.0. It’s light and durable and used by plenty of college and pro attackmen.

Lacrosse Shaft: My favorite lacrosse shaft for attackmen is the StringKing Metal 3 Pro. It’s super lightweight and made out of metal, so it won’t break.