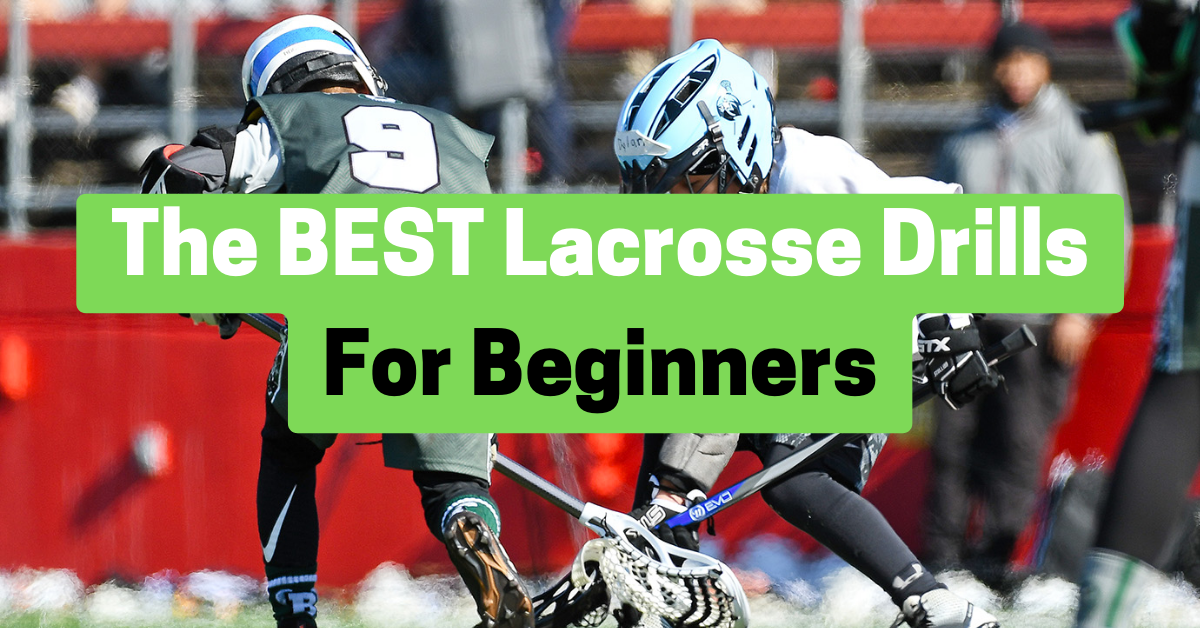 Wondering what the best lacrosse drills for beginners are? Here are X I use with my beginner lacrosse players every week.

I’m Jake and I’m a lacrosse coach. One of the common questions lacrosse beginners ask me is, “what are the best lacrosse drills I can do as a beginner?”

Today, I want to answer that question – these are my favorite drills that I use with my beginner players.

Each drill is designed to help you work on one of the main skills you need to become a great lacrosse player.

These can be done with or without a partner. Let’s get into it.

Now pick up a lacrosse ball and approach the first cone. You’re going to do a dodge at each cone – starting with a split dodge.

Then at the next cone, do a roll dodge. When you get to the final cone, do a face dodge.

Once you feel like you got the hang of it, you can do the drill quicker and do all the dodges in succession. Feel free to make this drill your own, do two split dodges, then a roll. Or 3 roll dodges in a row! Whatever you want to work on.

You might’ve heard of this wallball before, and it’s one of the best drills you can do as a beginner. Here’s a quick routine you can do to get started.

Start with 25 reps of normal right handed and left handed passing and catching. Stand a few yards from the wall and pick a spot and just get comfortable. Make sure you’re keeping your arms up and focus on hitting the same spot every single time.

Then do 25 each hand of cross handed throwing. Throw the ball to the other side of your body and catch it with your same hand, then bring it back over towards you and throw again. It’s going to feel weird at first and it’s going to take some practice.

Then let’s move onto 25 reps each of one handed passing and catching, take your hand put it in the middle of your stick and pass like you normally would – this drill really helps you with the strength of your wrists, and it might be a bit hard at first. Feel free to put two hands on the stick to catch it if you need to, but soon you’ll be able to do it 1 handed no problem!

Then let’s move onto 25 reps of catch right throw left, and throw left catch right. just like the name says, throw with one hand and quickly switch the stick and catch it with the other. This will help you with your reaction time.

Then to finish things off, let’s do 25 reps of quickstick, which is almost like a game of hot potato where you try to throw and catch the ball as fast as you can. Once you get into a rhythm you’ll be able to do it with ease.

I want you to place 2 cones 10 to 20 yards apart and and get a lacrosse ball. Then cradle the ball back and forth between each cone, switching hands when you get to one side.

Once you feel comfortable doing this with 2 hands, switch to doing it with 1 hand as well. 1 handed cradling is going to feel difficult at first, but you’ll get used to it.

There are two tips I ant you to keep in mind here:

#1: Keep your head up the whole time. It’s easy to look down when you practice cradling, but you want to make sure keep your eyes up at all times so you can see open teammates and defenders coming.

#2: Make sure you don’t hang your stick back. You want to keep the stick nice and close to your body so it is protected. Remember that you can’t “chest” the lacrosse ball – you have to keep space in between the lacrosse head and your body.

I want you to place several balls spread out on a field. Then start at once side of the field and run through the ball and scoop it up.

Keep repeating this several times, and once you feel comfortable, I want you to kick the ball and then scoop it up. Yes – you’re allowed to kick the ball in lacrosse – it’s completely legal and a good idea.

One thing I want you to look out for is raking – you don’t want to roll the ball back and then scoop it; you want to quickly scoop through the ball.

If you’re having trouble scooping, make sure to get both of your hands parallel to the ground. My coach used to say, get your knuckles bloody, like you would be scraping them if you were picking up the ball on concrete. (Ouch)

The final progression to the drill is scooping up the ball, then making a dodge like we did in an earlier drill.

For this drill, I want to start out simple. Place a cone about 5 yards away from the goal, and put a pile of balls a few yards behind the cone.

Then take a ball and start shooting. Shooting in lacrosse can be tough at first. For now, don’t worry about where the ball is going – just get a feel for how it travels out of the stick.

Once you feel comfortable, pick a spot on the goal that you want to shoot – the best place to shoot in lacrosse is offside hip or the middle right of the goal. On a right handed goalie, this is the hardest place to save, so putting the ball in that spot gives you the highest percentage chance of the ball going in.

You can also work on your bounce shot, which is bouncing the ball before it goes in the goal. This is a great way to throw off the goalie.

Now let’s head behind the goal for this drill. Place a bucket of balls behind the goal, and then place a cone at about 5 yards up and 5 yards away from the goal on either side.

Now pick up a ball from behind, and run towards one of the cones.

When you get to the cone, you can choose to either go over it and shoot, or I want you to do a roll dodge under it and score – hence the name over under.

And you can mix it up – you can do any combination of dodges you want to do. The most important part is that you’re changing up whether you’re going over or under.

And a quick tip here – don’t leave your stick hanging as you go around or under the cone. If you leave it hanging, a defender is going to check the ball out of your stick.

This is similar to the over under drill we just mentioned, but from the other side of the goal.

Keep your cones where they are, but bring your bucket of balls and split them a few feet above the goal on either cone.

Take a few steps towards the cone, and then go right of the cone towards the middle of the goal and shoot, or go left the cone and do a roll dodge or a face dodge and shoot.

Just like the last drill, practicing this will help you change up your dodges so you’re not doing the same thing every time, and you’ll keep your defender guessing.

Even though it’s going to feel awkward, perform this drill with your opposite hand as well. After awhile, it will feel normal to do both hands.

now let’s move onto our next drill, the scoop and score drill.

Place a bunch of lacrosse balls randomly spaced out about 10 yards above the goal. Then position yourself a few yards up, and start running towards one of the balls.

Pick up a lacrosse ball and sprint towards the goal and shoot it. You can shoot the ball immediately after you stand, or take a few steps closer in and shoot it in close.

This drill combines the skill of ground balls and shooting. It forces you to run through the ground ball and make a quick decision when you shoot.

Just like the other drills, make sure your head is up once you scoop the ball.

Many times when you get a ground ball, a defender will be close by ready to hit you, so you always want to be aware.

#8: Down the Alley Drill

Place your bucket of balls 15 yards or so up from the goal in one pile. Then place a cone a few feet in front of those balls that’s directly in the middle of the goal.

Now pick up a ball, run towards the cone, and make a dodge.

It could be a split, a roll, a face dodge – it doesn’t matter. Then run down the alley or the side of the goal and take a shot.

So if you’re going towards the left side of the goal, you’ll be shooting with your left hand and vice versa.

This drill will really help you with your shooting on the run – meaning your feet should be moving as you shoot it as opposed to them being planted.

And if you want to throw another wrinkle into this drill, as you’re about to shoot it, roll back towards the middle of the field and score.

challenge you to do a few of these drills at least 3 times a week for a month. i can almost guarantee you will find yourself improving.