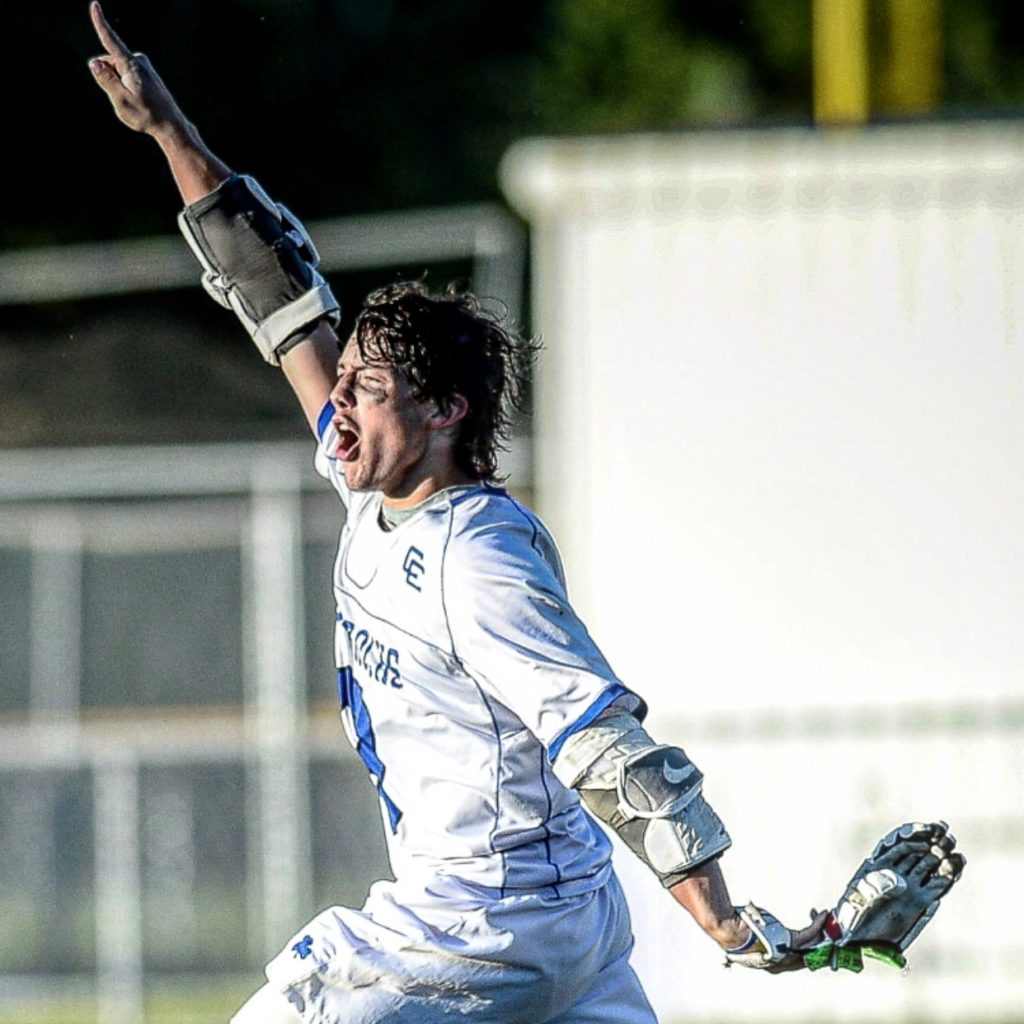 When did you first start playing lacrosse? Do you remember any particular reasons why you liked it?

I first started playing lacrosse in 4th grade for the Walled Lake Gladiators. I quit baseball following my season in 3rd grade not expecting to find another sport to pick up in the spring due to the fact that I was playing football and basketball at the time. I loved how faced pace and creative the game was, I wasn’t limited to a particular playbook or even style of play, I got to just imagine things in the backyard and implement them into practice and eventually games. I move around a lot and usually struggle to sit still so not having so many stoppages during play allowed me to run like I’ve always wanted.

What was your recruiting process like? When did you first think that college lacrosse would be a possibility?

Every young lacrosse players dream is to play in college it just comes down to wether they actually want to. I started seriously considering the possibility in about 7th grade while I was playing for a small organization called shamrocks lacrosse that fed into my high school. I attended the 3d bluechip camp in 8th grade to kind of kick off my recruiting circuit for the rest of my career in high school. Personally I loved being recruited at an early age, the thrill of visiting colleges at such a young age and competing against the best committed talent at tournaments is what I lived for. I committed going into my sophomore year of high school so I finished the logistical stuff relatively early but unfortunately things aren’t like that anymore. The rule change isn’t exactly the best thing for everyone but it doesn’t really affect me anymore.

What is your lacrosse community like in your own words?

My lacrosse community is my life. My closest friends are Division 1 commits and aspiring division one athletes. I’ve spent my summers traveling the country making new friends left and right. I’m in about 5 group chats right now with kids from different states that I’ve played on teams with. The game of lacrosse is a lot more about the ride rather than the result. The time I’ve spent these past years of my life working to get to college by training  traveling and playing I wouldn’t change for anything else. At home helping local travel teams and coaching makes it easy to give back the things you learned while away. This is what helps grow the game to places like the Midwest.

Why did you choose your college versus any other college?

This is actually the most common question I get but I enjoy answering it more than anything I ever talk about. I was raised in Wixom, Michigan which is about 45 minutes from where Detroit Mercy is located so I’m very familiar with the area from going to Tigers and Lions games throughout my childhood. I wanted to stay close to home and there are only two division one programs in Michigan….UDM and Michigan. I work well in smaller schools and classes in terms of focus and really knowing who’s sitting next to me and who is up talking at the front of the room. Detroit Mercy is my home, I’ve spent my last 4 years getting to know the coaches, administration and players, I couldn’t be happier to be attending the university in the fall. Coach Kolon is by far the most down to earth man I know making it easy to connect on subjects outside of the lacrosse field. Coach Adams has one of the most underrated offensive minds in college lacrosse and the assistant coaches are second to none. We’re doing something special down here and one day people are going to see the change of culture in not only the lacrosse program but also the city. Deep at heart I think Detroit is just misunderstood in terms of a city. I’ll show you around the downtown area and I’m sure your opinion will change in seconds.

Why do you think you’ve become an elite player when there are thousands of lacrosse players out there? What have you done to separate yourself?

I’ve been very fortunate to have plenty of exposure throughout the years due to great parents and coaches but for me its all about the love of the game. It sounds cheesy but I love what I do and I couldn’t be happier while doing it no matter if it’s tedious drill or even playing defense. It’s pretty easy when you have a net in the backyard and a stick in your hand every day and shoot which is why my shot is where it is today. At a certain point in your life you almost become addicted to the game and can’t get enough of it rather finding yourself shooting with floodlights on at 2am on a school night, messing with your stick for 5 hours until you get it exactly the way you like it and watching lacrosse film room on youtube every night before bed to try and figure out shifty new moves. Love what you do and you’ll never work a day in your life.

What’s your biggest piece of advice for a younger player?

Off hand, off hand and again the off hand. I don’t use my left hand as frequent as I should be because its not as skilled as my right but I see the guys who practice both a ton and it greatly sets them apart at the college game. Yes I’ve been working with it a lot this summer but its nowhere near some of the kids who have been using it consistently since they started playing.

What are you doing to prepare for the college game?

Running … lots and lots of running. I’ve been working out and getting physically into shape more than I ever have before. As far as stick work and shooting goes I try to shoot around or touch my stick at least once everyday. Wether its just messing around in the backyard or hitting a hard shooting workout on the turf its definitely a must to keep the stick in your hands during the summer. I attended the committed combine and the committed academy this summer to help me keep in touch with the live game. I learned a tremendous amount at the combine and it definitely has helped me expand my game. Something I’ve been trying to greatly improve is my 2 man game skill. I’m very fortunate to have my brother with me to work on it in the backyard because without him I wouldn’t be going into college so prepared.

Who is your biggest mentor?

I see this category in two different viewpoints. I have a mentor in the game of lacrosse and a mentor for how to live my life. My mentor on the lacrosse field is Sergio Salcido from Syracuse. He is such an explosive player dodging from the midfield and distributes the ball like nobody I’ve ever seen. He sees the game as one big game of 3 on 3, by looking past the first slide and on to the second and hitting the guys wide open on the backside. Thats such a special skill to have and not to mention his work ethic is off the charts. As far as a mentor on how to live my life id have to say my dad. I know its cliche to call your dad your hero and favorite person in the world but in this case it couldn’t be more spot on. My dad has provided me with plenty of opportunities to excel in school, sports and socially. I’m not always as thankful as I should be being a teenager and losing grasp of what is really important in life but I’m so appreciative of everything he has done for me. He’s the guy I go to at my highest highs and my lowest lows and I wouldn’t want it any other way. I come from a big catholic background and religion is very important to my family and I, which is why my dad has been such a good mentor to me. He sacrificed plenty of things of his own that were important to him to send my brother and I to the greatest catholic institution in the Midwest and is still the man to run into our rooms Sunday morning and wake us up to go to mass. He’s truly the greatest man I know and I don’t expect that to ever change.

Do you have a mantra that you live by?

I didn’t really have one until around June of last year after I finished up at the IL committed academy for the first time. I was at a seminar listening to a man named Adam Silva speaking on behalf of the wounded warrior project. He talked about the brotherhood he learned at west point and how this sport means more than just the score on the scoreboard but then he said something that peaked my interest. “Mission first, people always.” I didn’t really understand it at first but I looked it up and read about it for a little bit that night. People can interpret the saying a number of different ways and each way being insightful. The way I viewed the message is that the mission at hand is the focus but we are all human beings, forever and always. The nature of humans is emotional and can sometimes SEEM to get in the way of what we are trying to achieve but going to an all guys school I look to my left and right knowing I have my brothers next to me no matter what happens.

What’s your gear setup (head, mesh, shaft, gloves) and what club teams/organizations were you a part of?

I’m a bit of a gear head, I love to mess with my stick and equipment combinations constantly. I use a maverik optik with east coast dyes hero mesh. I’ve used it for about 3 years now and have always tried to change away and try something new but I always end up going right back to the same head. I just recently switched to the dragonfly gen 7 shaft to try and get a little bit more power on my shot and it has certainly helped. I used to hate composite shafts because I use a good amount of whip on my sticks so it would just shoot straight down but I guess the shaft just fits a shooters game really well. I have 4 of these sticks lined up in my room to cycle through once one breaks or just gets too worn down.