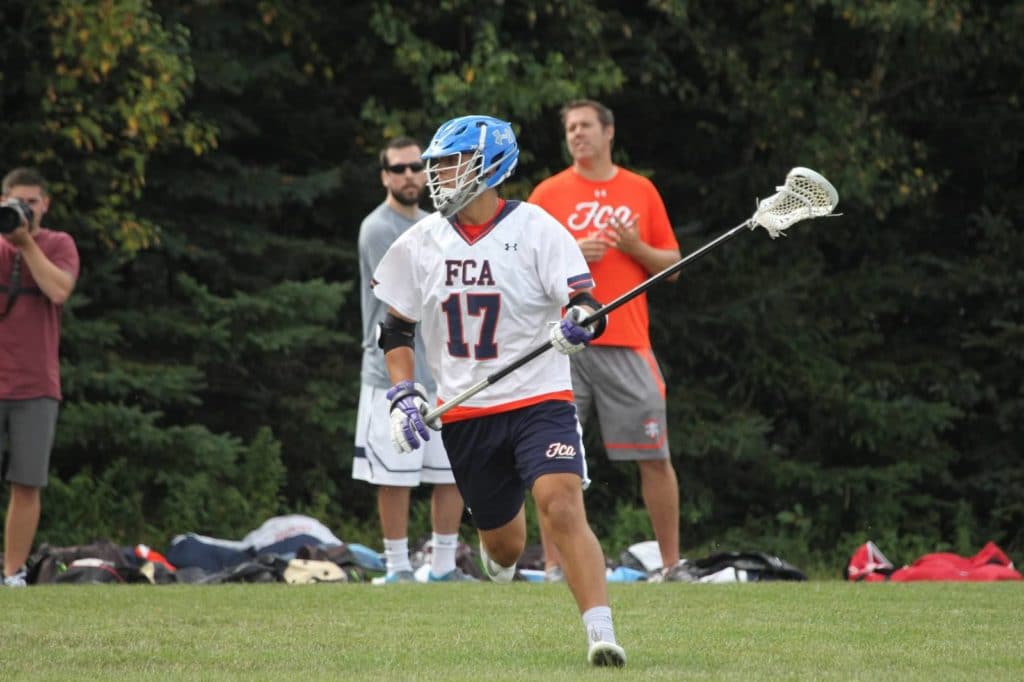 Jack DeSantis is a dominant physical presence on the lacrosse field. The 2018 Maryland commit is a shut-down defender who welcomes any attackman to a one on one battle. I was happy to talk to Jack and see how he has reached this point in his lacrosse career.

Born and raised in Columbus, Ohio, lacrosse had a presence but was not a huge deal. “I started playing lacrosse in 3rd grade and the sport grew as I got older. By the time I was in middle school, there were 3 teams, but baseball was still the most popular sport.” By 7th grade, DeSantis decided he would commit himself to lacrosse in a pursuit to play at the highest NCAA level. “It was my dream to play D1 lacrosse. I was in my backyard everyday shooting and using my bounce back net to get better.”

To accomplish his dream, DeSantis went to eight different prospect camps the summer before his freshman year at notable schools such as Norte Dame, North Carolina and Duke. After catching the eye of many coaches, DeSantis was offered by the University of Maryland coaching staff. In the winter before his first high school season, DeSantis gave his verbal commitment. “I had a great feeling about my commitment, and I still do today.”

Transitioning from middle school to high school was not a problem for DeSantis as he started every game as a freshman at St. Francis DeSales in Columbus. He excelled on the field and continued to improve his lacrosse abilities. The summer before his junior year of high school, DeSantis believes he became an elite player after playing on the Fellowship of Christian Athletes national team. “That’s when I took the next step. I originally didn’t think I was capable of playing like that.”

Now that DeSantis has reached his senior year, he is only one year away from heading to the University of Maryland in the fall of 2018. He originally fell in love with the campus three years ago and was attracted to the school by its winning atmosphere. DeSantis and the Maryland coaching staff also share a close relationship. “Coach Tillman and I talk often about life and what is going on in high school for me. I am getting to know coach Bernhardt well, and I look forward to playing for the Maryland coaching staff.”

The biggest lesson that DeSantis has learned so far is that nobody can control the past. “If I get beat, it’s in the past. I can only focus on winning the next battle.” These are wise words from a young defender that will help him keep a mental edge during a game.

DeSantis credits his success to his family and coaches that have helped him so far. “I would just like to thank all my coaches and family. Especially coach Matt Triplet from DeSales for helping me along my journey. You will never be forgotten.”

I am excited to follow Jack during his senior year and to see him go at it with the best attackmen in the country when he gets to Maryland. He has worked extremely hard to get to this point, and I believe more success is yet to come both on and off the field.