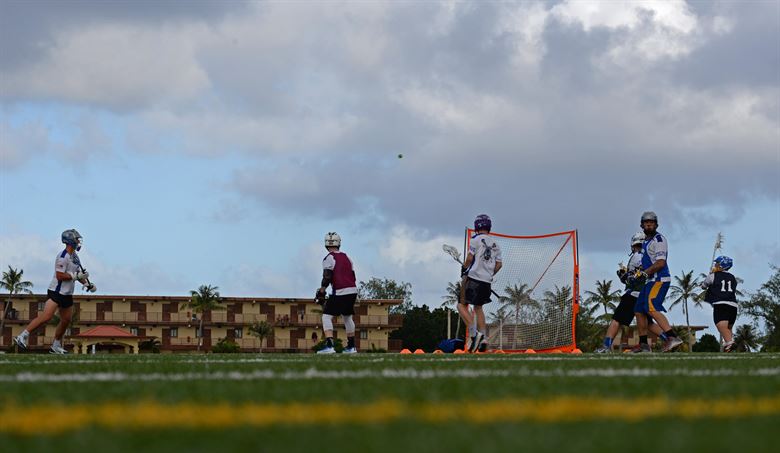 Lacrosse has many different positions, and it’s important that you understand each position and its purpose in the game. You might be familiar with a few of the positions already, but as lacrosse has evolved, several “specialized” positions have emerged.

Today, I will explain the “main” and “specialized” positions in depth, so you can know exactly which position does has which role on the field. After the explanations, I will list the names of the very best pro lacrosse players at their respective positions, so you can see what the position is like firsthand from elite lacrosse players.

Attackmen – The “forwards” of lacrosse. These players are in charge of scoring the ball.

Midfielders – The runners of lacrosse that play both offense and defense.

Defenseman – The players in charge of stopping the offense from scoring and have extra long 6 foot lacrosse poles.

FOGOs (Face Off Get Off) – These players are in charge of winning the face off that happens at the start of every quarter and after every goal.

LSMs, (Long Stick Midfielders) – These midfielders get an extra long pole making them a threat on defense.

SSDMs, (Short Stick Defensive Midfielders) – These are midfielders who specialize in playing defense only.

What does an Attackman do in lacrosse?

The primary job of attackmen in lacrosse is to score the ball. Attackmen are like forwards in soccer; they are tasked with getting the ball from the midfielders and shooting the ball. These players usually have the most goals or assists on the team. There are usually 3 attackmen on the field at once.

The X Attackmen: This “X” refers to the area behind the goal. They are usually the best dodgers on a team, and they try to get past their defender for a shot or pass.

The Wing Attackmen: These attackmen line up in a wide position out and away from the goal. Wing attackmen are usually good dodgers or shooters.

The Crease Attackmen: These attackmen line up close to the goal and primarily move without the ball. The X or Wing Attackmen look for these players for an easy “slam dunk” type of shot.

All attackmen have one defensive responsibility called riding. Think of a full court press in basketball where players are trying to prevent the opposing team from bringing the ball down the field.

The Best Attackmen in the World:

Matt Rambo (Whipsnakes Lacrosse Club, Univ. of Maryland ‘17) – Matt Rambo is considered by many to be THE BEST at attack right now. He uses his size and strength to get past defenders and score. He usually plays at X or on the wing and has a great shot.

Rob Pannell (Atlas Lacrosse Club, Cornell ‘13) – Rob Pannell is another lacrosse player consistently ranked as one of the best ever. He is the ultimate X Attackmen who uses his footwork and Lacrosse IQ to confuse defenses.

John Grant Jr. (Denver Outlaws) – Many consider John Grant Jr. to be the greatest lacrosse player of all time. He uses his size and stick skills to make jaw-dropping plays that you can’t miss. He has been playing and coaching professional lacrosse since 1999.

What does a midfielder do in lacrosse?

Midfielders are the most versatile players in lacrosse. They can play offense and defense and are used all over the lacrosse field. There are usually 3 midfielders on the field at once.

It takes an immense amount of endurance to run up and down the field, so midfielders usually run in short “shifts” and substitute in and out often, just like you would see in a hockey game.

Many of the shots midfielders take are “on the run” which means their feet are moving while they shoot.

Midfielders also play in transition situations where they bring the ball from the defense to the offense.

The Best Midfielders in the World:

Tom Schreiber (Archers Lacrosse Club, Princeton ‘14) – Schreiber is another one of those lacrosse players who is in contention for being the best lacrosse player in the world. He’s like the LeBron James of lacrosse – he can pass, shoot and facilitate the ball better than anyone else.

Paul Rabil (Atlas Lacrosse Club, Johns Hopkins ‘08) – Rabil certainly gets the crown for the most recognizable lacrosse player. He uses his crazy shot on the run and athletic ability to get by defenders, and now he’s building the Premier Lacrosse League with his brother, Mike.

Mike Chanenchuk (Whipsnakes Lacrosse Club, Maryland ‘14) – An amazing outside shooter, Chanenchuk uses his range to stretch defenses and score plenty of goals. He comes from a strong background of lacrosse, and he is certainly a player to look up to if you are an aspiring midfielder.

What does a defender do in lacrosse?

Defenders try to stop attackmen from scoring the ball. These lacrosse players have an extra long, 72 inch pole (compared to the 40 inch pole of a non-defenseman). There are usually 3 defenders on the field at once.

Defenders work with their teammates and goalies to prevent an offense from scoring. They communicate the most of out of any player on the field and you can usually hear them from the sideline.

In addition to defense, defenders are tasked with clearing the ball from the defensive side of the field in a safe and timely manner while the attackmen ride (play defense) on them.

The Best Defenders in the World:

Tucker Durkin (Atlas Lacrosse Club, Johns Hopkins ‘13) – Durkin is widely known as the best defenseman in the world, and it would be a challenge for anyone to match up against him. He is aggressive and a perfect player for any aspiring defenseman to watch.

Jarrod Neumann (Chaos Lacrosse Club, Providence ‘17) – A budding superstar in lacrosse, Neumann uses his massive frame to bully and intimidate attackmen. In 2019, he was named the PLL Defensive player of the year.

Matt Dunn (Whipsnakes Lacrosse Club, Maryland ‘14) – Maryland is known for producing great defenseman, and Matt Dunn is no exception. As the highest rated defenseman on the 2019 PLL Top 50 list, Dunn uses his quick feet and hard checks to match up against anyone.

What does a goalie do in lacrosse?

Goalies are a lacrosse team’s last line of defense. They are in charge with stopping shots from the opposing team. With shot speeds of 100+ MPH in professional lacrosse, goalies are some of the bravest athletes I know.

The goalie is really the commander of the entire defense. You will hear goalies constantly call out to their fellow defenseman where certain players are, and they help keep the entire unit on the same page.

In addition, goalies help out on clearing to get the ball from the defensive side of the field to the offensive side. Sometimes goalies will have to make long, accurate passes in order to make this happen.

The Best Goalies in the World:

Blaze Riorden (Chaos Lacrosse Club, Albany ‘16) – Riorden is unlike any other goalie in lacrosse. He has some of the quickest reflexes and stick skills. As he has progressed in his career, many people are calling Riorden the future of goalies.

Dillon Ward (Chaos Lacrosse Club, Bellarmine ‘13) – A canadian who also plays plenty of box lacrosse, Ward is one of the toughest keepers in lacrosse. He rose to international prominence in the 2014 FIL World Games when Team Canada beat Team USA.

Kyle Bernlohr (Whipsnakes Lacrosse Club, Maryland ‘16) – Kyle is known for making one of the greatest saves in lacrosse history in the 2016 College Lacrosse National Championship game. He uses his quick reflexes and fast decision making to keep balls from going in the net.

What does a FOGO do in lacrosse?

Short for “Face off, get off,” a FOGO’s main job is to win the face off that happens at the start of every quarter and after every goal.

Faceoffs are like jump balls in basketball or faceoffs in hockey – two men are squared up to each other and try to fight for possession of the lacrosse ball.

The FOGO is a relatively new position that has seen tremendous growth in the past 10 years. Some FOGOs stay on offense after winning the face off, but most of them come out of the game in place of an offensive midfielder.

If a FOGO loses a face off, they must play defense until their team can substitute on a defensive midfielder.

The Best FOGOs in the World:

Trevor Baptiste (Atlas Lacrosse Club, Denver ‘18) – Baptiste is one of the current superstars in lacrosse and undisputed “best faceoff man in the world.” He uses his strength and wits to win faceoffs at a ridiculously high rate.

Greg Gurenlian (Retired, Penn State ‘06) – Gurenlian is considered the “father of faceoffs” and has trained nearly every great faceoff man in the last 10 years. He started his own company called the Faceoff Academy and trains the next crop of FOGO superstars.

TD Irelan (Yale ‘20) – Although Baptiste is the greatest, Irelan is not too close behind. The FOGO from Yale is as good as they come, and he’s broken many of the college records that Baptiste previously claimed.

What does an LSM do in lacrosse?

Short for “long stick midfielder,” LSMs are midfielders that have an extra long pole like a defenseman, but can go anywhere on the field like a midfielder.

Players with longer poles have an easier time on defense, and 4 players with these extra long poles can be on the field at once. Teams use LSMs in defensive situations, and often times the LSM will guard an opposing team’s best midfielder.

LSMs are also involved in faceoffs and can either take a faceoff or play on the wing and fight for the ground ball.

The Best LSMs in the World:

Michael Ehrhardt (Whipsnakes Lacrosse Club, Maryland ‘14) – Named the MVP of the 2018 FIL World Championships, Ehrhardt is certainly an LSM who can do it all. He uses his stick skills and strength to play nearly anywhere on the lacrosse field.

What does a SSDM do in lacrosse?

SSDMs or “Short stick defensive midfielders,” are midfielders who specifically play on defense instead of both offense and defense. Lacrosse teams will substitute SSDMs to match up against the opposing team’s midfielders.

SSDMs will also help clear the ball with the rest of the defense and come out when the ball is on offense.

The position has seen an increase in popularity in the past 5 years as lacrosse has become more specialized.

The Best SSDMs in the World:

Jake Bernhardt (Whipsnakes Lacrosse Club, Maryland ‘13) – Bernhardt comes from a family rich with lacrosse and sports history. He is known as one of the most intimidating SSDMs in the sport.

Dominique Alexander (Archers Lacrosse Club, Ohio State ‘13) – One of the most athletic and skilled SSDMs in lacrosse, Alexander is feared and respected by all midfielders.

Ty Warner (Whipsnakes Lacrosse Club, Yale ‘18) – After winning a national championship for Yale, Warner has quickly made a name for himself as one of the best and smartest SSDMs in the sport.