The Ultimate Resource for Lacrosse Players and Fans
Film Room

Lacrosse Tutorial: How to Shoot the Lacrosse Ball like Mac O’Keefe 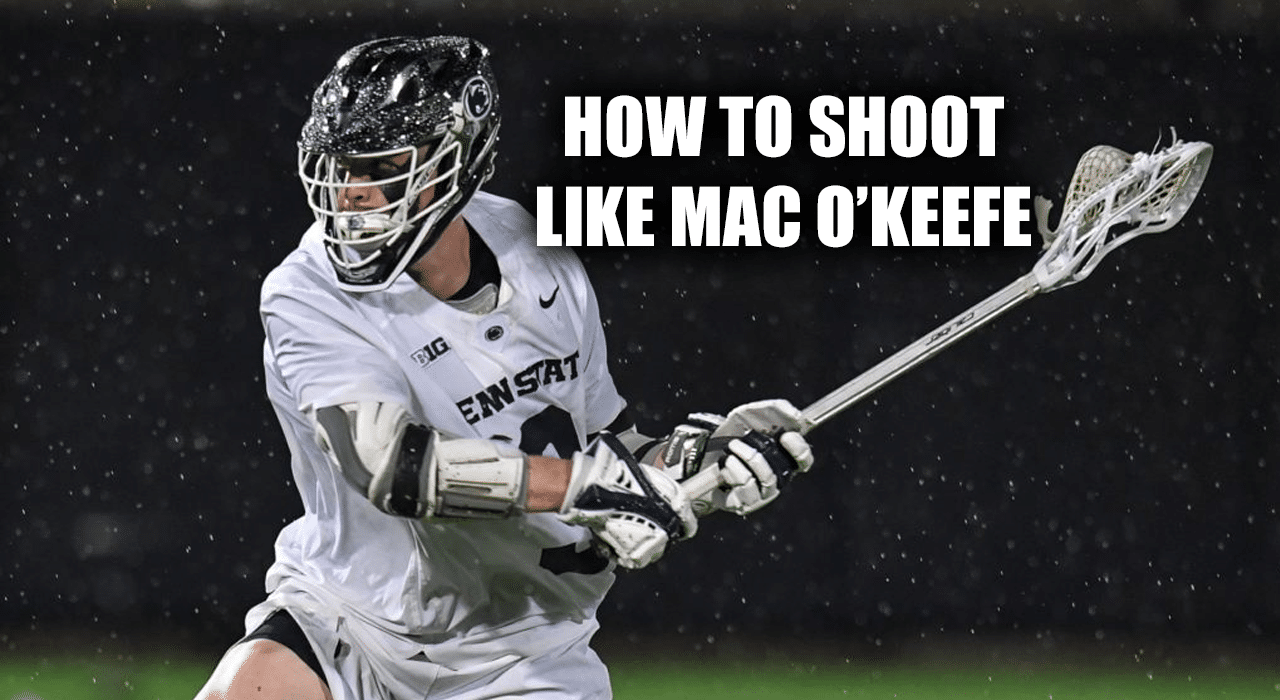 Goalies are scared of him. His teammates love him! Mac O’Keefe is the considered by many to be the best lacrosse shooter in the entire world. With his quick release and pin point accuracy, it’s almost impossible for anyone to stop a lacrosse shot from O’Keefe.

Today I want to break down exactly what makes Mac such an incredible shooter and tell you what drills and techniques you need to do to become the next great lacrosse shooter like Mac O’Keefe. Whether you’re a beginner or advanced lacrosse player, by the end of this video, you’re going to know everything you need to do to become a goal scoring machine. I’d highly recommend you re-read this article and take notes to soak everything in. You can also check out the video version of this article on my YouTube channel:

Before we get started, do you mind if I send you an email each week with even more lacrosse tips and advice just like this? If that answer is yes, come on over and join the Lax Weekly email newsletter. Over 500 of you have already subscribed! You can also follow me on Twitter or Instagram @laxweeklyHQ. Now let’s get into it!

So, the #1 way you can start shooting like Mac O’Keefe? Develop your off-ball movement in lacrosse. This is everything you do when you don’t have the lacrosse ball in your stick, and Mac O’Keefe is world class at it. You see, he utilizes different cuts and tricks to get himself open from his defenders. Sometimes he’ll do a backdoor cut where he cuts away from the ball instead of towards it. Sometimes he’ll do a simple v cut where he runs into his defender and then takes a few steps out to create space.

He’s constantly looking at his defender’s head and when he notices that his defender isn’t watching him, that’s when he’ll make cut and get open to score. And he’s not just running around like a chicken with his head cut off, he’s cutting to really good angles on the field where he has a lot of the goal to work with. Make sure you’re not fading away towards goal line extended, but instead cutting towards topside.

And here’s another thing O’Keefe does really well: he presents a very clear target to his teammates. His lacrosse stick is up right next to his ear so anyone with decent stick skills can easily make a pass to him.

So now that we know that off-ball movement is so important in lacrosse, how do we practice it? The best way to do it is by watching film, and more specifically, your own film if that’s possible. If you have access to film from your games, don’t just watch your goals or assists, watch what you could have done better, especially without the ball. Watch your defender’s head and see if you could have made a cut when he wasn’t looking. Take notes. Write that stuff down. This is truly how you go from being a good lacrosse player to great lacrosse player.

#2: Have a Quick Shooting Release

Next, the #2 way to start shooting like Mac O’Keefe is to have a lightning-fast release. No one has a quicker shooting release than Mac. That guy has the lacrosse ball in his stick for maybe half a second and it’s gone. No unnecessary cradles, no windups, just catch and shoot.

But how exactly do you develop such a quick release? I have the perfect drill for you. Get a bucket of lacrosse balls and place them in 5-10 yards away from the goal in a spot you normally shoot. Make sure you count how many balls you have. Now set a timer on your phone and start shooting the balls as fast as you can one by one, while still keeping your proper shooting form. Do this until all the lacrosse balls are gone. Make note of your time. Maybe it took you 5 minutes. Tomorrow, try to get to 4 minutes and 50 seconds, and then 4 and 40, and so on. This is a super easy drill to help you develop a quick release just like Mac O’Keefe.

#3: Change Levels When You Shoot

Moving onto strategy #3 which is changing levels. There is no one who changes levels better when they shoot than O’Keefe. He can put the ball in any corner high or low, he can put it between the legs, he can do whatever he wants.

Why is this important? Because it keeps lacrosse goalies guessing. We all know that one teammate who shoots high to high every time. You just know it. But you never know where O’Keefe is going to shoot it. He has no tendencies. You can’t scout him. So if he’s changing levels every time, what do the goalies start doing? They start guessing. And when goalies start guessing, that’s when you start having games with 5 6 7 goals.

Too many players I know are lazy when it comes to shooting practice. They just aim the ball in the same place every time. The only way to be able to change levels as well as O’Keefe is by practicing where you put the ball.

Luckily it’s super easy to practice. Next time you go shoot, bring some cans or a few cones and some string. Now tie these cans or cones to different spots on the goal. Once that’s done, your mission should be to absolutely obliterate these targets. Practice shooting one high, shooting one low, and another high. No two shots should be the same. If you start practicing like this, changing levels will become second nature for you, and you’ll be the leading scorer on your team.

Now if you’re this far in the article, number one thank you, and number two I’m assuming that you’re probably a lacrosse player who’s really taking their game seriously, and I respect that!

If you or your son is hungry for even more lacrosse tips and advice, I just started a premium email newsletter that I send out 5 times a week built for lacrosse players who are trying to get better every day. It’s packed with film breakdowns, drills, fitness advice, motivation and other things that just won’t exist anywhere else. It’s 10 bucks a month and you can try it for free for 7 days.

#4: Bring Your Hands Far Back When You Shoot the Lacrosse Ball

The next way to start shooting like O’Keefe is by bringing your hands as far back as possible when you shoot. When you watch film on Mac, you see his arms are extended basically as far as they can go.

Bringing your hands back makes your lacrosse shot so much better for two reasons. #1 – it hides your stick from the goalie. When your hands are back, the stick is behind your body, so the goalie can’t see the ball when it’s released. When the goalie cannot see the ball, that’s usually a good sign that you’re going to score. # 2 – it allows you to generate way more power on your shot. If you think of shooting like a lever, the longer the lever, the more powerful it is. This is the exact same thing with a lacrosse shot, the further your hands are back, the bigger the lever and the harder your shot will become.

So how do you practice making sure your hands are back? The best way to do this is by filming yourself shooting. Go prop up your smartphone with an extra pad and record yourself while you shoot. During your water break, quickly scroll through the recording and see if your hands were back. Keep readjusting until this becomes second nature.

And the #5 way to start shooting like O’Keefe is by establishing a consistent shooting stroke. When you watch film on Mac, every shot looks the exact same. It’s almost unbelievable how similar each shot looks.

When he shoots, he doesn’t have to think of his shooting form and where he’s going to move his body, he just, shoots it, almost like a Machine. When you make your lacrosse shooting form automatic, that’s when you become a really dangerous shooter. But the only way to do this by developing muscle memory, and how do you develop that?

It’s so simple. By shooting more. In lacrosse, there’s no magic formula or trick that’s going to change how you play. The only magic trick is that if you shoot consistently and keep working at it, you will become great at shooting. I can almost guarantee you Mac O’Keefe spent more time than anyone else in his backyard shooting on the goal.

There’s no way he could be this consistent and automatic without it. I hope this inspires you to go to a wall or a goal and start shooting. Fall in love with the process. It’s not going to be easy, but you’re going to progress faster than you could imagine if you just do it every day.

Anyways, thank you so much to everyone for reading. Comment down below who you want to see next, and you can always email me with any questions at contactlaxweekly@gmail.com. Have a great day!