When Sean Kuttin steps out onto the field, he knows that he’s playing for more than just himself. “Someone’s always watching. Whether it’s a college recruiter or a little kid who has never seen lacrosse, there’s always someone out there to play for.” Kuttin was that little kid, idolizing Tom Schreiber, a former collegiate star at Princeton and current midfielder for the Ohio Machine, who has become one of the best lacrosse players in the world. Sean went from admiring Schreiber to training with him on a regular basis. “He has been a huge influence on me. Tom is a great role model to have.” This training has helped Kuttin become one of the most talented players in the 2018 class. 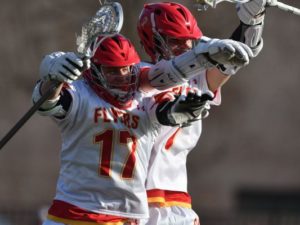 Since the beginning of his lacrosse career, Kuttin has played with a competitive edge that separates him from other players. As a fifth grader, he went from playing lacrosse in a recreational league, to playing with the elite Team 91 travel team. When he noticed that he wasn’t the guy with the ball in his stick at the end of the game, he made it his mission to train harder than anyone. His days were spent shooting on the run over and over again, working on his split dodge and change of direction. “I took my training very seriously. Being a multi-sport athlete, I made sure to focus heavily on my footwork and agility.”

This training paid off for Kuttin, as he was quickly noticed by many of the big-time Division 1 coaches. As a freshman, Kuttin verballed to Johns Hopkins, one of the most storied programs in lacrosse history. In addition, he was ranked the #19 2018 recruit by Ty Xanders of Recruiting Rundown. Those accolades brought along heavy attention from opposing teams; they began to game plan specifically for him. “The rankings definitely put some weight on my shoulders. People expected a lot out of me early on.”

This past May, Sean did some reevaluation about his goals as a lacrosse player. He decided to switch his commitment to Yale, a team that has won 5 out of the last 7 Ivy League championships. His younger brother, Kevin, is a talented 2020 player as well. Kuttin feels that he has matured significantly since his freshman year, and believes that other freshman might benefit from the new recruiting legislation. “I like the new recruiting rules that are being put in place. As a freshman, it was easy to get caught up with social media and the rankings, but now I can see things a lot more clearly.” 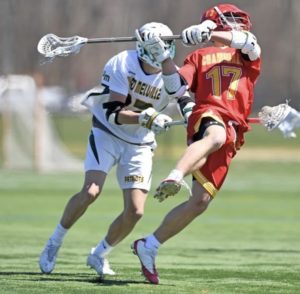 Sean is heading into his last year of varsity play with Chaminade High School. His goal: finish the 2018 season undefeated. “It’s definitely something we’re capable of doing. Every time I step out onto the field, I have something to prove.” Kuttin also has a strong faith and devotes himself to Christ. “My relationship with God and Jesus is a huge part of me.”

Kuttin has worked hard to get to this point in his career; he is a true testament to the many lessons lacrosse can teach a player. Whether it’s learning how to be a role model to younger kids, or thinking hard about life decisions, he uses lacrosse as a tool to grow as a person and a leader.